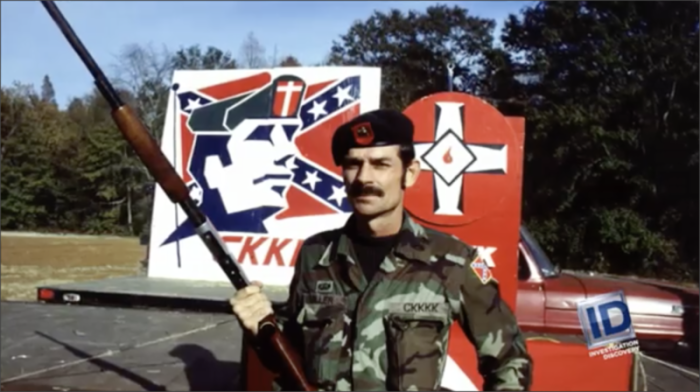 Investigation Discovery (ID) and Emmy Award-winning journalist Tony Harris are teaming up once again with premiere civil rights advocacy organization, the Southern Poverty Law Center (SPLC), to produce HATE IN AMERICA, a new documentary strand that showcases the SPLC’s efforts to combat bigotry and hate groups in the United States.
The mission of the SPLC and its legendary founder, Morris Dees, are to combat the hate, intolerance and discrimination perpetuated by these groups through education, litigation and advocacy.
According to the SPLC’s 2015 Intelligence Report, the number of extremist groups operating domestically grew by 14% from 2014, and the SPLC catalogued an astounding 892 hate groups in the US, including neo-Nazis, white nationalists, black separatists, Klansmen and other groups that target the LGBT community. Produced by NBC News’ award-winning production arm Peacock Productions, the documentary series HATE IN AMERICA kicks off with its first premiere on Monday, February 29 at 8/7c, showcasing the SPLC’s remarkable strides to fight organized hate over the past four decades.
In the first episode of HATE IN AMERICA, titled The Klan on Trial, Harris explores some of the SPLC’s most riveting court cases, starting with the Michael Donald case – a heinous lynching of a young man in the early 1980s that prompted SPLC founder Morris Dees to sue the United Klans of America (UKA) on behalf of the victim’s mother. In this landmark court decision, the UKA’s violent leadership was held responsible for the unspeakably violent and racist acts of its members, helping to turn the tide against organized hate in our country. Harris also digs deep into the deeds of notorious white supremacist murderer Glenn Miller, who most recently made national headlines when he went on a shooting spree at a Kansas Jewish Community Center in April 2014.
The first episode of HATE IN AMERICA, The Klan on Trial premieres on Monday, February 29at 8/7c on Investigation Discovery, with subsequent premieres airing throughout 2016.